PleasureTown is an audio drama on the WBEZ podcast network. To learn more about PleasureTown, click on the link below.

In episode 3 of season 3, you may notice the gospel song “This Train” lovingly covered by our resident music makers Megan Deiger and Tim Hazen of River Rising.

The American railroad boom was a long one; it stretched from the mid-1800s into the following century. With it came so much possibility in the form of travel, commerce, and technological progress that the idea of locomotive transit permeated all aspects of pop culture, from a rise in demand for toy trains to train-themed board games to photography and lithograph art and, of course, music.

To get an idea of just how much trains have impacted popular music: There have been more than 1,150 songs written between the 1800s and today that reference trains. From “Take the A Train” to “Midnight Train to Georgia” to “Tons of Steel,” trains have been used as both literal and metaphorical modes of transportation by music artists.

Since its inception, “This Train” has changed forms many times and has been covered by artists of many backgrounds, but its original form was rooted in black gospel music, and its message is at once heartbreaking and hopeful, the train in the song signifying that intense light of hope and faith set against the painful reality of a deeply persecuted people.

We wanted to celebrate the beauty and emotion behind this song, but not without acknowledging that this beauty and emotion originally came from a place of deep pain that deserves to be recognized. We hope you’ll enjoy the episode, and the heartfelt rendition of “This Train” River Rising has shared with us.

Take A Look Around 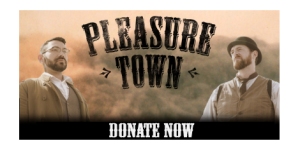 Want to stay up to date on the latest PleasureTown news and contests? Receive our monthly newsletter directly in your inbox. We promise not to be a bother!